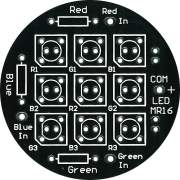 Light Emitting Diodes (LEDs) are an attractive, economical and convenient option for lighting applications. Available in a wide variety of colors, styles, sizes and intensities, LEDs provide for inexpensive, highly-efficient, low-voltage, reliable lighting solutions. Applications range from lighting in aquariums, recreational vehicles, marine and aircraft to computer case mods, under-vehicle lighting, emergency/security lighting and accent-lighting in the kitchen and around your home - the options are endless.

One challenge with LEDs is the mounting of the displays. We produce several innovative solutions, including the LED MR16.

The LED MR16 holds the LEDs on a compact 1 7/8" (48mm) diameter board. Designed to fit into standard MR16 down light frames (12v 50W halogen frames) and holds nine 5mm LEDs or nine Super Flux / Piranha 4-pin LEDs, an exclusive unique feature of our board.

A total of three separate inputs have been provided on the LED MR16, allowing for the placement of three colors of LEDs on the board. Red LEDs can be placed at R1, R2 & R3, Blue LEDs at B1, B2 & B3, and Green LEDs at G1, G2 & G3. The LED MR16 can also be used with a single color LED - such as white to provide a spotlight effect, simply populate LEDs at each position on the board. This setup is very common for white-only or Infrared (IR) LED applications.

Construction of the LED MR16 is extremely simple and can be completed by the novice builder in less than 30 minutes requiring only minimal soldering skills. With only nine LEDs and three resistors, this system is likely to be one the simplest and most satisfying kits you will ever construct.

A complete instruction manual, which includes construction guide and schematics for the LED MR16 is available for download. 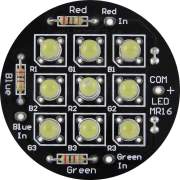 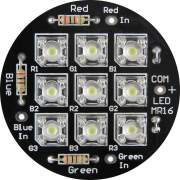