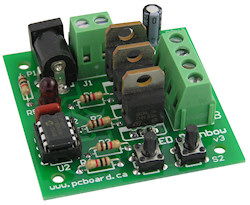 The LED Rainbow is a dedicated Pulse Width Modulation (PWM) controller which generates color changing effects with RGB LED lighting products. The circuit controls three outputs, each which has the ability to run an LED segment, and with three segments, is a natural for the control of RGB LED arrays.

LED Rainbow Sequences are fully customizable and are contained in the microcontroller, which has the ability to strobe, cycle and fade the lighting, creating a massive palette of over 16 million colors using Pulse Width Modulation (PWM) technology. Each output has a resolution of 8-bits, which gives each color a range of 256 intensities and when the three colors are mixed together, a full rainbow of color combinations is possible.

Want to see the LED Rainbow in action? Posted on YouTube is a video of the controller running one of our LED MR16 RGB display board, holding four RGB LEDs, and housed in a standard household frosted lamp globe. Assembly time of this project was about one hour and the results are amazing to see and produce a bright, shadow-free show. We have seen our LED Rainbow incorporated into other lighting products also, including acrylic displays for edge lighting.

We have an Instructable, which is a very detailed construction guide of the LED Rainbow. The Instructable walkthrough of the complete assembly process of one of the systems and can be completed by even a beginner at electronics in about 30 minutes.

We provide additional code for the LED Rainbow, and we encourage you to visit our site often to view the different coding sequences we may come up with. All are fully downloadable for free and can be programmed into your own PIC processor (providing you have a PIC programmer). Additional detailed support including coding information is also on our support web site to assist you in creating your own effects.

The LED Rainbow is available as a fully assembled and tested product, as a kit of components you can build at home, or just the bare board which you can supply your own components for. Average assembly time of the kit can be accomplished by the novice builder in less than one hour.

New in version 3 in addition to the extra sequences, is the placement of “markers”. Markers allow you to quickly determine where in the list of sequences you are located. Positioned every ten sequences, there is a special sequence which blinks out the current location. For example, if you were at sequence 30, the LEDs would blink three times; and the same for position 10, 20, 40 and 50, with one blink for every ten positions. The exception to this is the sequence located at position 60, this is actually the last usable sequence and is not a position marker. The sequence located at position 61 (the last sequence on the chip) is use to identify the version of firmware which will blink just the green channel three times (for version 3 of the firmware).

Each effect is selected by pressing of the Mode (S1) button. The LED Rainbow will remember the last sequence you were using after 10 seconds of viewing it, which when powered on at a later date will automatically start with your last viewed sequence.

We have attempted to describe the various effects below, but the descriptions cannot describe just how good the LED Rainbow displays the combinations. We encourage you to use the chart as a reference. The version 3 firmware is available for immediate download from the Programming page.

Sequences Included in the version 3 Firmware

Routines used on the LED Rainbow are fully customizable, although programming skills are required along with a PIC programmer to write your code to the PIC microcontroller.

We have customized the sequence files, and have both the source and HEX files available for free download.

If you would prefer not to customize the code yourself, you can choose to download the HEX files, which can be programmed into your PIC microcontroller. We have standardized on the Microchip PIC 12F683, which features 2Kx14 of programming space, along with 128x8 bytes of RAM, all in a single, 8-pin package. This should have more than enought space to hold almost any customized sequences you can dream of creating.

When you download the source files, the ZIP file will contain a number of individual files. Each of these files is necessary when compiling the application, which is done with the Microchip MPLAB IDE. For our programming and testing, we used v8.00.

Contained in the ZIP file, there is a single file called SequenceData.inc which contains the code to control the lighting sequences. This file can be edited, adding additional code to customize your own sequences, or you can amend the code to bring new or different features, or delete sections if you do not want specific sequences.

Shown below is a sample of the SequenceData.inc file. Pay close attention to the format of the data as each sequence is terminated with an 'end of sequence' terminator line (shown in BLUE), while an 'end of all data' tag is used to terminate all activities (shown in RED). Each line of data, other than terminator lines, must contain five separate values, which indicate Fade Rate, Hold Time, along with the Red, Green and Blue intensity levels.

When designing sequences, there can be a maximum of 256 individual sequences although you will likely run out of program space on the processor prior to reaching that level.

Some simple guidelines to follow when creating your sequences:

After editing sequenceData.inc the file should be saved and the rgbsa-inet.asm reassembled. The resulting rgbsa-inet.hex file can them be programmed into the PIC.

During the development process, we sometimes receive special requests for customized sequences for the LED Rainbow, and other times we receive sequences that others have developed and desire to share with others. The sequences below are all customized, some simple, some very complex, but are all available for you to take and use in your displays. All you need to do is to download the files that you wish and program them into your processors.

Each of the sequences below are ZIP files containting a simple text file that can be renamed to the sequencedata.inc format which you compile and program into your processor.

pade.zip: This is the sequence used by Manfred Pade for his outdoor garden lights project. See his dedicated page for more information including a tutorial on building up the garden lights.

fades.zip: Two very simple, yet visually stunning displays which cycle through either a blue-red sequence or a red-orange sequence. Each of these are offered is six display speeds of approximately 3.6, 6.1, 8.7, 11.2, 13.8 and 16.3 seconds.