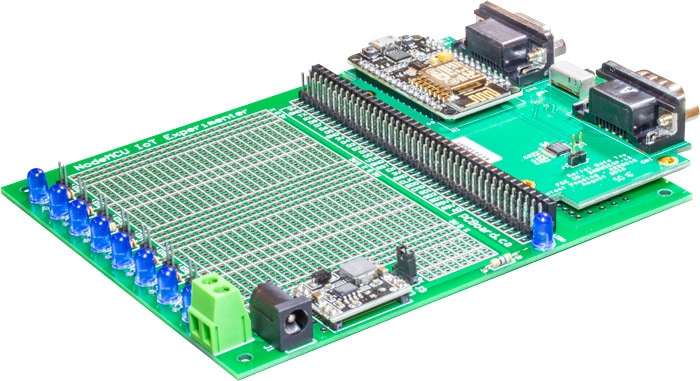 The NodeMCU is an extremely powerful and compatible Internet of Things (IoT) solution, which also is compatible with the Arduino ecosystem and development tools. The NodeMCU IoT Experimenter enhances the basic abilities by providing an environment which provides a rapid hardware development prototyping area.

The prototyping board features a universal socket area for mounting either narrow or wide NodeMCU processors, a regulated power module, indicator LEDs and over 1,000 plated holes on the prototype surface.

The NodeMCU IoT Experimenter is a versatile prototyping platform for use with a variety of popular NodeMCU modules including our NodeMCU carrier board. Great to use for IoT projects, advanced or straightforward interfacing and as a prototyping platform. The NodeMCU, with its versatility, including its ability to be programmed and used from the Arduino IDE, makes it along with this prototyping board the perfect experimenter’s solution.

The NodeMCU IoT Experimenter measures 5 5/16" x 4.5" (135mm x 115mm) with a solder mask on each side, plated holes along with a high-contrast silk-screen labeling component and prototyping positions.

Features of the board include a mounting socket area to accept either wide 1.1" or narrow 0.9" pitch NodeMCU modules. This includes the Amica NodeMCU carrier board (narrow pin spacing) to compatible variants such as the LoLin NodeMCU models. Power can be provided directly to your NodeMCU module through its built-in USB interface. Alternately, power can be supplied to the NodeMCU IoT Experimenter board which has provisions for a regulated power supply module.

The board offers over 1,000 plated-through holes on the prototype surface, mounting for eight status indicator LEDs along with dropping resistors and a power indicator LED. The prototyping area offers power busbars for the Ground (G), +3.3V (3V) power rail, and a third rail X. The third rail can be used for external voltages such as a 5V rail.

Interfacing to the NodeMCU is through a series of headers which extend each pin of the NodeMCU to rows of four headers. Each port is labeled to identify matching pins from the NodeMCU. The header area is located below the NodeMCU using standard 40-pin headers allowing for versatility in interfacing for sockets or header pins. 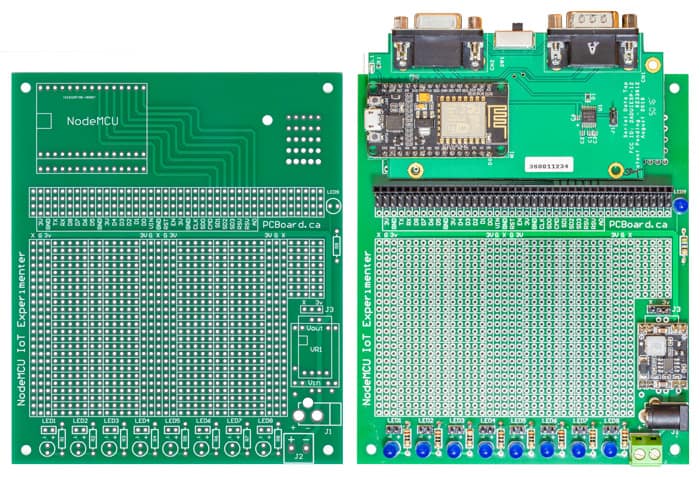 Components To Complete This Kit

This kit contains all parts necessary to build up the NodeMCU IoT Experimenter.
Give yourself about 1 hour to assemble and solder the kit of parts.
Note: Items marked with [ X ] are included in the kit. This is a full kit, so all necessary components are included and ready for assembly.

The 1x40 Single Row Male Connector needs to be cut-to-size as needed.

PDF format Quick Reference Guide. The guide is a handy resource for use while assembling your NodeMCU IoT Experimenter.

At the bottom of the board, there are provisions for up to eight LEDs and dropping resistors. LED1 to LED8 can either be 3mm or 5mm LEDs. Each kit includes eight bright 5mm frosted Blue LEDs, along with eight currently limiting resistors (for position R1 to R8).

A LED for power indicator at LED9 is included with the kit and is a frosted Blue LED. Resistor R9, also included with the kit, limits current flow through the LED. The LED is set up to minimally draw approximately 8mA of current - maximizing power usage in current-sensitive applications.

The NodeMCU requires 3.3V to operate. Power can be applied directly to the NodeMCU through the USB connector, alternately, unregulated power (5V to 15V DC) can be supplied to power connected J1 or J2.

We have produced a Quick Reference Guide, which is available in PDF format and is a summary of our detailed information available on our NodeMCU Information Pages. The guide is a handy resource while assembling your NodeMCU IoT Experimenter board.

A one-stop resource for all information on the NodeMCU IoT Experimenter prototype board.

The NodeMCU offers a variety of development environments, including compatibility with the Arduino IDE. The NodeMCU/ESP8266 community created an Arduino add-on. If you’re just getting started programming the ESP8266 or an established developer, this is the highly recommended environment.

Includes NodeMCU and All Parts 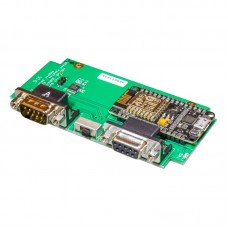 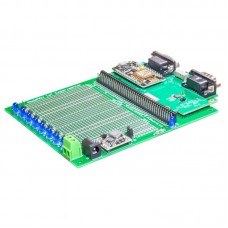 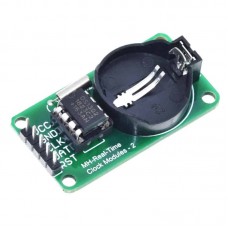