Arduino Nano or ATTiny85 Prototype Board

The Proto Arduino is a general-purpose prototyping platform. It is compatible with the Arduino Nano v3 or Digispark style ATTiny85 processors boards. Onboard features include a regulated power supply. Dedicated mounting provided for either an Arduino Nano or ATTiny85 processor board. The prototyping surface offers over 850 plated-through holes. Mounting for eight LEDs along with dropping resistors is also provided.

The Proto Arduino is a high-quality prototype board with solder masks on both sides of the board. Plated holes along with a high-contrast silk-screen labeling component positions. Board size is 3 3/4” x 5” (95mm x 127mm) ready to fit into standard size project cases.

The complete Proto Arduino Users Guide is available for download in PDF format.

Don't forget to visit our dedicated support page for the Proto Arduino. The support page contains the latest information and application notes available.

Components Needed To Complete This Kit

Note: Items marked with [ X ] are included in the base kit.

This item is for only the bare Proto Arduino Prototype Board along with the five connectors for the Nano and ATTiny85 processors. You will need to supply the remainder of the components necessary to complete this board.

Both the ATTiny85 and the Nano processors support a regulated 5v DC power input. They also offer the ability for a power input with a 7 to 12v DC power source.

When 7-12v power is used, the regulators on the processor boards will regulate the power. It should be noted that that on board regulators are for lower current operation.

The Proto Arduino board also has an onboard regulator and power filtering circuit. When this is used, the board will provide regulated 5v to both processor sockets.

A LED for power indicating is included on the board. Resistor R9 limits current flow through the LED. Although a handy option, the LED draws approximately 20mA of current. The LED will illuminate when 5v power is available to either Arduino module. It will also light when the onboard 5v power supply is used.

Precautions When Assembling The Board

The Proto Arduino design allows for use with many manufacturers of ATTiny85 boards. Some designs have strayed from the original specifications. The pin spacing for the signal leads on the board can vary between various manufacturers. This variance can impede the installation into the proto board socket.

This can be overcome by slightly tipping the pins towards the bottom of the proto board. This solution has allowed us the flexibility to install all design variations in ATTiny85 boards. This should be done when you are soldering the connector to the PCB.

Ardunio Prototype Board for Arduino Nano or ATTiny85

Basic Kit - You Supply The Parts 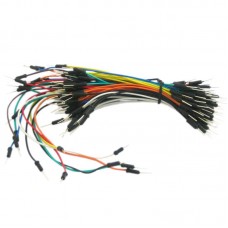 With these flexible jumper wires, you can easily provide electrical contact between components on a .. 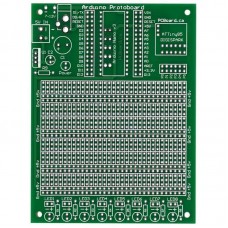 Ardunio Prototype Board Full Kit for Arduino Nano or ATTiny85

Advanced Kit With All Parts